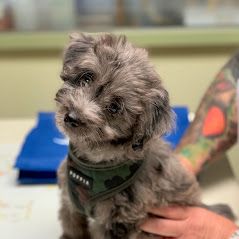 Parasites are one of the most frustrating things that can affect your pet, often with very unpleasant symptoms. Parasites come in a variety of forms; some live inside your pet and some live on the outside of their body. However, all parasites have one thing in common: they all thrive by deriving their nutrients from your pet’s body at the expense of their health.

The good news is that it is possible to prevent your pet from having to suffer from a parasite problem thanks to the wide range of preventative medications and treatments available.

Our experienced team here at Petaluma Veterinary Hospital understands just how important it is to keep your pet properly protected against parasites at all times, and we offer a comprehensive parasite control service. In the meantime, here is what you need to know about parasites and the importance of protecting your pet.

There are several types of intestinal parasites that live in the digestive system. They breed and multiply, causing symptoms including coughing, vomiting/diarrhea, low appetite and energy, and weight loss. These worms are spread through direct contact with worm eggs, such as those that can be passed out in an infected animal’s stools. Some of the deworming products we carry at Petaluma Veterinary Hospital include Drontal, Drontal Plus, Panacur, Strongid and Profender.

A very destructive type of worm is called heartworm. Heartworm larvae are transmitted by mosquitos that travel between animals. Unlike other worms, heartworms live in the blood vessels of the heart and lungs of the host where they grow and reproduce. They eventually prevent healthy blood flow that can lead to heart failure, lung disease, organ damage and even death in dogs.

The symptoms of heartworms are very easily overlooked and can take a long time to appear. By the time they do, significant damage may have already been done to your pet’s health. Symptoms include a mild, persistent cough, reluctance to exercise, fatigue and decreased appetite.

Heartworm is caused by parasitic worm larvae that live inside mosquitoes. When the mosquito bites your dog, some worm larvae are transferred into your dog. The larvae then mature, mate and produce offspring. These are known as microfilariae and they live in the dog’s bloodstream. When a mosquito then bites an infected dog, it draws microfilariae into its body where it turns it into infective larvae, beginning the cycle again.

Once a dog has been infected it takes time (usually 6-7 months) for the larvae to mature into adults that are capable of reproduction. Adult heartworms look like cooked spaghetti and can range in size from 4-6 inches (male worms) and 10-12 inches (female worms.

The number of worms found in a pet is known as its ‘worm burden’ and can vary greatly from 1-250 worms, with an average of 15. The lifespan of heartworms within an infected dog is between 5 and 7 years.

The severity of symptoms of heartworm is dependent on the worm burden of the dog, how long it has been infected and how well their body can cope with the disease. However, it is usually broken down into four stages.

Class 1: No visible symptoms or very mild symptoms such as an intermittent cough or wheeze.

Class 2: Mild to more moderate symptoms including intermittent coughing and lethargy or breathlessness after light-moderate exercise. At this time some heart and lung changes may be seen on x-rays.

Class 3: Symptoms will include frequent or persistent coughing, lethargy and breathlessness after mild activity. Heart and lung changes will definitely be visible on x-rays.

Class 4: This stage is otherwise known as Caval Syndrome and is reached when an infected dog has been left untreated for an extended period of time. At this stage, the animal experiences restricted blood flow to the heart caused by a blockage of worms. Heart failure is imminent and emergency surgery to remove the worms is the only course of action. However, this comes with its own risks and most dogs with Caval Syndrome do not survive.

The FDA has approved a number of heartworm preventative treatments such as Heartgard which eradicates microfilariae from your dog’s bloodstream, thereby preventing the young heartworms from reaching maturity. Because of constant upgrades in treatment, it is best that you speak to one of our veterinarians at Petaluma Veterinary Hospital about the best treatment for your particular pet. As with most illnesses, prevention is much better than cure. Annual testing for heartworm is recommended along with year-round preventative (i.e. Heartgard).

Fleas are one of the most common types of external parasites and are prevalent in wild animals as well as pets. Fleas are tiny, wingless creatures that travel between hosts by jumping. They consume blood, and while a few fleas may not cause major blood loss, they can reproduce quickly, meaning it is possible for a pet to develop large populations of fleas if not treated quickly.

This can lead to your pet developing anemia. Flea saliva contains toxins that are highly irritating, with some pets experiencing an allergic reaction to flea bites. This causes intense, unstoppable itching for which fleas are well known. Other symptoms of fleas include red patches on the skin, hair loss and skin infections that occur from scratching. If your pet becomes anemic, they may seem lethargic and have pale gums. Unfortunately, fleas are a very common and annoying occurrence and it is important to treat your dogs and cats for worms and fleas on a regular basis.

How do I know if my pet has fleas?

It is not uncommon to see fleas jumping off and on your pet’s body, but they are very small and very fast. Fleas are flat-bodied, dark brown or black in color (unless they are full of blood in which case they can be lighter) and usually less than an eighth of an inch long.

Typical animal behavioral symptoms include restlessness and chewing, scratching, or licking certain parts of his body more often than usual. If you suspect that your dog or cat has fleas, check the skin and coat for signs of fleas or ‘flea dirt’ which looks like regular dirt but is actually flea feces. If you aren’t sure if it is actual dirt rather than flea dirt, put some on a paper towel and add some water. If it is flea dirt, then it will turn a reddish brown as it will contain blood that the flea has ingested and then excreted.

With so many different flea treatments available on the market, finding the right one can be tricky. The best thing to do is to bring your pet to see one of our veterinarians at Petaluma Veterinary Hospital to determine the most appropriate treatment for your specific pet.
Some flea and tick products we carry at Petaluma Veterinary Hospital include Nexgard, Cheristin, Bravecto, and Feline Bravecto, all of which are extremely effective and fast acting.

Ticks are another external parasite that drop or climb onto your pet from trees, plants, and bushes. They are well known for carrying a range of diseases including Lyme disease, ehrlichiosis, anaplasmosis, babesiosis, and rocky mountain spotted fever. All of these can have serious consequences for the health of your pet.
Tick-borne diseases don’t present with any immediate symptoms, so it can take weeks or months to realize that your pet has been affected. Ticks are visible to the naked eye, so checking your pets when you groom them is recommended because this gives you the best opportunity to spot and remove ticks before they harm your pet.

Ticks are arachnids that belong to the same family as spiders and mites. They are parasitic and feed on the blood of host animals. They are visible to the naked eye but start off fairly small before swelling with blood as they feast.

Animals living near heavily wooded areas will have increased exposure to ticks which like to live in thick long grass, as it allows them to attach to host animals as they walk by. Ticks are most active during the late spring and summer months and they are not fussy about which breeds of animals they feed on. In Northern California ticks are a problem year-round.

Animals with few ticks can present with little or no symptoms and it is often not until there is a larger infestation or infection from the bites that signs become apparent. When symptoms do materialize they can include itching, scratching and visible red or inflamed irritations on the skin. Symptoms from reactions or diseases can include fever, lethargy, loss of appetite and pain and can last for several days or several weeks. If you are concerned that your pet has developed illness from a tick bite, consult with one of our veterinarians at Petaluma Veterinary Hospital as soon as possible.

Checking your Pet for Ticks

Dogs and cats that spend a lot of time outdoors will be more at risk. Checking your pet carefully on a regular basis will help you prevent a tick infestation from taking root. Run your hands over your pet’s coat to check for any unusual lumps, and check carefully around the head, feet and ears as these are the preferred locations for most ticks.

It is best to remove a tick as soon as you spot it. Remove the parasite near the attachment base at the pet’s skin using a pair of tweezers. Ensure that you remove all parts of the tick as it is possible for parts of it to remain embedded in your pet’s skin which could cause infection. Tick blood could be infected with a number of diseases so avoid getting it on yourself or your pet.

Some medications offer protection against more than one type of parasite. For example, some products prevent against both fleas and ticks in a single product like Nexgard and Bravecto. Most also need to be given on a regular basis and it is crucial that you take note of this and ensure that this schedule is strictly adhered to. Even being a few days late with preventative medication could leave your pet vulnerable to being affected. See a veterinarian at Petaluma Veterinary Hospital to select the right treatment and schedule for your pet.

Prevention is better than cure!

As with most illnesses, prevention is almost certainly better than cure! Speak to one of our veterinarians about topical treatment to protect against tick infestation, but also be sure to make the area surrounding your home a less hospitable environment for ticks by mowing your lawn regularly and removing any tall weeds.